Councillors Peter Jeffries, Chris Coleman and Wendy Flynn each slept rough for a night to raise money for the YMCA as well as awareness of youth homelessness Councillor Peter Jeffries, who represented Springbank ward on the Borough Council, said "Supporting the YMCA Sleep Easy 16, raising the profile and much needed funds for their work with the homeless, by sleeping in a cold, damp cardboard box for one night, doesn't really reflect how being homeless must feel. It does give a brief insight however.

"Personally, it brings back memories from my youth when for a short time I was homeless. Being able to support the Cheltenham YMCA for me is an honour and I thank them for the opportunity" 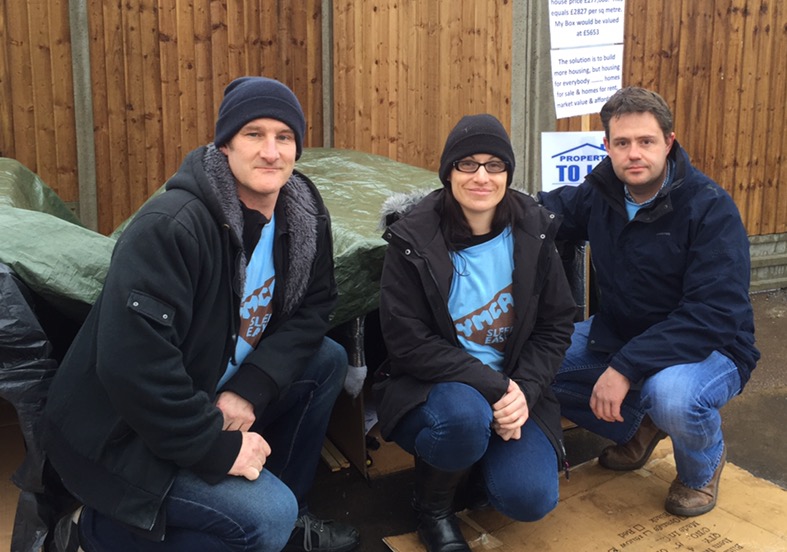 St Marks ward Councillor Chris Coleman said: "I knew it was going to be cold - just not that cold. I knew it was going to be wet - just not that wet. But what really hit me was the sense of loneliness that I felt as I lay in my box at 3 in the morning trying to sleep. I felt vulnerable as well but cannot begin to think how vulnerable I would have felt if that box had been in a town centre, or under a bridge or in a park.

"When the morning finally came I then wondered how I would feel if I was homeless for real. I'd had a tough night but how would I spent the day? Probably no family, no friends, no money, no job. The list - and the despair - goes on. And then there would be the worry about whether my box, housing all I owned, would be in one piece by the time the evening came. I know I would find that despair intolerable."

Former Mayor of Cheltenham and current Hester's Way ward Councillor Wendy Flynn joined her colleagues in taking part in the event. She is also an enthusiastic supporter of the work of the YMCA in Cheltenham.