Suzanne and Peter helped start up and sustain a local food bank in their community.

12 weeks ago the food bank didn’t exist. Since then Suzanne and Peter have, along with other volunteers in Springbank, collected surplus stock from supermarkets every evening, secured a lease from the council for a premises, and helped deliver over 2000 food parcels to households in Cheltenham. Most of the parcels have been delivered in the West of Cheltenham, but volunteers have also responded to requests from all over town and further afield. 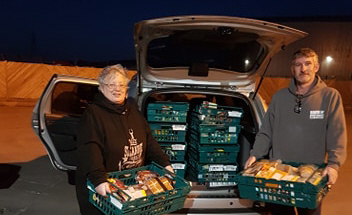 The food bank has now evolved to become ‘The Springbank Community Group', with exciting plans to continue to serve the local area in the future.

“This is an extraordinary time and it has been wonderful to be a part of a truly national show of civic engagement and social support. Springbank is a fantastic community and I am so proud to have worked with dozens of volunteers to help out”

“I am thrilled to have been chosen as a winner and want to thank everyone in the team who has done their bit; they are all far more deserving than me! I know, with lockdown lifting, things are getting easier for people, but we will all be ready to muck-in again if there’s a second peak.”

“With national leadership seeming so thin, it is the community champions on the front lines who have truly made our country proud. I am therefore so pleased to be able to send my congratulations to Suzanne and Peter on this well-deserved recognition. As I have said before, I have been amazed by the energy, commitment and creativity shown by members of the Lib Dem community during the crisis