Cheltenham MP Martin Horwood visited Cheltenham Animal Shelter for the launch of their new campaign - Staffies. They’re Softer Than You Think.  The campaign, which is in partnership with Battersea Dogs and Cats Home in London, aims to raise awareness of the plight of the Staffie, challenge negative perceptions about the breed and show the true soft character of these loveable dogs, that were once known as ‘Nanny dogs’ for their affinity with children. 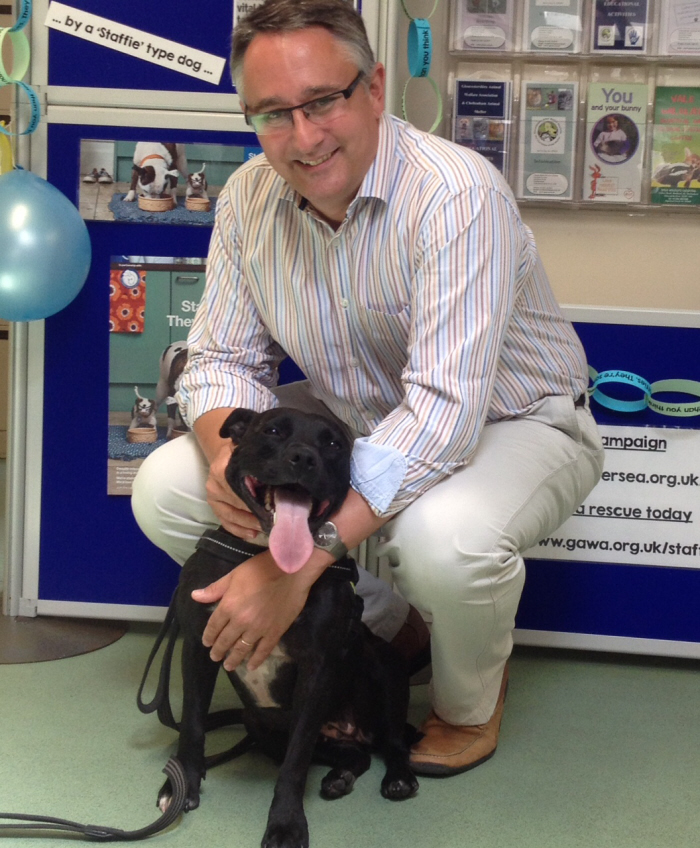 Martin spent time talking to staff about the new campaign and meeting some of the animal residents.  The shelter is part of Gloucestershire Animal Welfare Association, and has around 45 dogs, about 40% of which are staffies.

After visiting the animals, Martin said, “It is fantastic that we have this facility in Cheltenham I have always been active in my support for animal welfare and I wanted to thank Cheltenham Animal Shelter for all they are doing.”

Martin met two lovely staffies Bernie and Stella, who was a rescue dog but now works for the police sniffing out drugs, guns and money.

“Having seen all the animals today I am sure that anyone would greatly enjoy coming along and seeing all the incredible work that Cheltenham Animal Shelter is doing.  And if they want to drop in on the charity shop, make donations and maybe adopt a Staffie, what would be better.”

“The key message from today is that Staffies really are safer than you think.  They have a mixed reputation but they’re really intelligent dogs, affectionate and well behaved when they’ve been well looked after.”